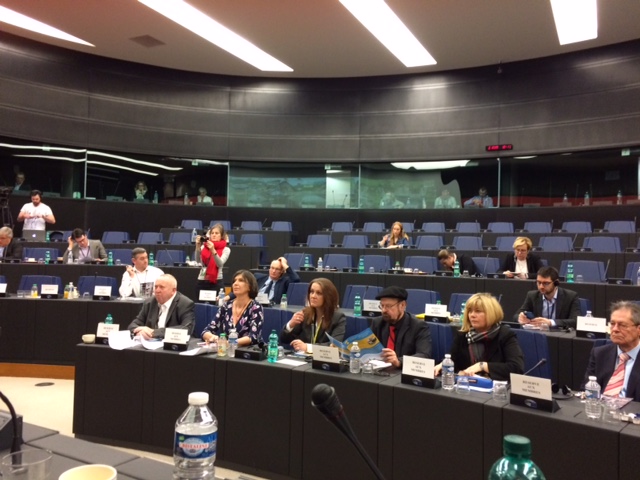 Yesterday 6 April, the EU Dog & Cat Alliance gave a presentation on "the need for an action plan to tackle the illegal trade in dogs and cats in the EU" at the European Parliament in Strasbourg. MEPs from the EP's Intergroup on the Welfare and Conservation of Animals gathered to discuss better regulation of the sale of companion animals in the EU and concrete next steps on how to take this forward in Brussels and in the Member States.

Simona Lipstaite, European Policy Advisor for the EU Dog & Cat Alliance, presented the Alliance's call for an action plan to tackle the illegal trade in dogs and cats in the EU. Each year hundreds of thousands of companion animals are illegally traded across the Member States. This trade has negative implications to animal health and welfare, public health, consumer protection and the smooth functioning of the EU internal market. The Alliance believes that the problem could be addressed through a comprehensive, coordinated approach involving the European Parliament, Commission and Member States, including border and veterinary authorities as well as the civil society, and is therefore calling for an EU action plan to tackle the illegal trade in dogs and cats. S. Lipstaite also presented on possible initiatives MEPs could support to this end, including calling for compulsory identification and registration of pets across the EU.

"The implications of the illegal trade in dogs and cats in the EU go far beyond simply animal health and welfare. They can also affect public health and consumer rights of EU citizens, as well as negatively impact the EU internal market in lost taxes and by creating unfair competition. The European Commission should take the lead in drawing up a comprehensive action plan which would address all of these issues and involve the Parliament and Member States, including border and veterinary authorities, in tackling this abominable trade," said S. Lipstaite.

In December 2016, 38 MEPs wrote to the European Commission asking it to address the issue of the illegal pet trade.